− The pandemic caused changes in the calendar of the most important meetings of the healthcare sector. During this year’s edition, over 130 exhibitors presented their offers. They are producers and distributors of apparatus and medical instruments, equipment for hospitals, clinics and medical offices. Rehabilitation and laboratory equipment was also presented − says Paulina Pietrzak, Director of the International Trade Fair of Medical Equipment and Instruments SALMED.

This year’s novelty was the Startup Zone. There you could see, among others, home stethoscope that uses artificial intelligence and is able to detect abnormal sounds in the respiratory system. Another novelty was software for self-coping with insomnia, thanks to which the patient at home participates in therapeutic sessions. The exhibitors presented their solutions on the Stage of Trends in Medicine, which for three days became the centre of innovation in health care.

Exhibitors with a recipe for success

The companies that were able to best illustrate their vision of the stand in conjunction with the marketing strategy received the ACANTHUS AUREUS awards. This year, this prestigious laurel this year was granted to three SALMED exhibitors: the Ministry of Development and Technology, and the companies: ASPEL SA and KLAROMED.

The MTP Gold Medal Competition is also a tradition of SALMED. Five products were distinguished in this edition.

- The SALMED trade fair is a window to medical innovation. It is a platform for the exchange of technological ideas. All this is for the benefit of patients. It is better diagnosis, better, less painful and less traumatic therapy. In turn, the medical personnel has an easier task of both diagnosing and treating patients. The very fact of participating in the SALMED fair is ennobling. The jury always focuses on the products to be awarded. They are analysed in great detail in terms of usefulness and innovation − notes Prof. Stefan Sajdak, Chairman of the MTP Gold Medal Competition Jury at the SALMED fair.

The ASPEL company has won as many as 3 distinctions, 2 Gold Medals and the Gold Medal Consumers’ Choice title for an innovative product which is the ASPEL 308 ABPM v.101 pressure recorder with the ASPEL 508 ABPM v.101 software.

- We have been present at the fair for 36 years. We are pleased that we have won two gold medals this year. Both award-winning products are related to the times we live in. The Covid pandemic has developed awareness and technology. It turns out that the most modern equipment does not have to be developed abroad. The construction of medical electronics in Poland for the diagnosis of heart, lung and brain diseases, which we do in our company, proves that it is also possible in our country − argued Andrzej Wrześniowski, MD, President of ASPEL SA.

As emphasised by the exhibitors, the pandemic influenced the functioning of many companies in the health care sector. One of them was FAMED ŻYWIEC. This leading manufacturer of medical equipment in Poland, which annually produces up to 45 thousand beds, had to increase production capacity at some point and refuse further orders.

− ICU bed stocks − I hope they have already been replenished and maybe we have learned that this 95% bed occupancy is too much. We have to prepare ourselves better for a possible next epidemic − said Michał Grossy from FAMED ŻYWIEC.

The development of post-Covid technology was clearly visible at the SALMED trade fair. Such an example was the presented glass cabin for breathing exercises. Hyperbaric oxygen therapy is a medical procedure in which the patient is completely enclosed in a pressure chamber that breathes pure oxygen at a pressure greater than one atmosphere.

− The chamber allows the patient to breathe pure oxygen under increased pressure. As a result, oxygen is transported to places in the body that it would not reach under normal conditions − argued Filip Sowiński from Omnioxa.

As noted by Krzysztof Kordel, MD, President of the Wielkopolska Medical Chamber, which was a partner of the fair and an organiser of resuscitation workshops, the problem in using innovative solutions is often costs. − There is no innovation that we would not implement for the benefit of patients. There is only one problem. The price. We will learn to use the benefits of new technologies, but first we have to buy it and then price it so that hospitals using new equipment or new technologies do not get into even greater debts − concluded the President Kordel.

Public procurement of medical devices in times of crisis

In order for medical procedures to be performed in accordance with the latest knowledge with the support of appropriate equipment and devices, awareness of legal regulations among health care managers is necessary. How the public procurement law has changed in recent years and what hospitals and companies can expect this year were the topics of discussions at the SALMED fair during the debate on public procurement in the context of medical devices. − These most important changes in the public procurement law are behind us. This has a very strong impact on efficiency. Now it is important to cover this skeleton with soft tissues, i.e. additional regulations. That is why cooperation in working groups is so important, it helps to develop recommendations ‘from practitioners for practitioners’ − said Michał Trybusz, the press spokesman of the Public Procurement Office.

As emphasised, there are currently as many as 500,000 medical devices on the market and the current public procurement practices are not adapted to such a variety of products. − Hospitals do not use new solutions to the extent that we would like them to. Let us remember that they are subject to public finance discipline. And that can often be a barrier. The medical devices industry is developing fantastically, these are no longer simple syringes, but robots, telemedicine, and computerisation. Therefore, orders for these advanced products should be created differently − noted Magdalena Żak, Chairman of the Public Procurement Committee of the POLMED Chamber.

During the discussion, the experts agreed that forecasting of equipment servicing is also important in public procurement. The need for a technical dialogue was emphasised, which would allow to predict subsequent operating costs. − A cheap thing can cost us dearly. Hospitals are becoming more and more aware and look not only at the price, but also at the quality and long-term costs of the investment made − said Tomasz Hajdyła, legal expert of the POLMED Chamber. Adam Twarowski from the Institute of Healthcare Management at the Lazarski University noted that efficiency has become the basic principle of public procurement.

White Paper of AI in Health announced at SALMED

Artificial intelligence algorithms are already used in Polish hospitals and medical entities. Solutions in this field were present not only at the exhibitors’ stands, but also formed part of the SALMED programme of events. Its important point was the discussion panel entitled: White Paper of AI in Health − how to use AI in clinical practice? Invited experts debated how to properly implement artificial intelligence in clinical practice. The discussion was attended by representatives of: Microsoft, Abbott, Medicover, the Lux Med Group, IQVIA and the law firm Domański Zakrzewski Palinka s.k. The discussion was moderated by Ligia Kornowska, the leader of the AI in Health Coalition and the Managing Director of the Polish Federation of Hospitals, who announced that this team had already started work on the White Paper of AI in Health.

− It is to facilitate the implementation of artificial intelligence in clinical practice. We are going to open public consultations in the second half of April − she added.

Tomasz Jaworski, Director of the Digital Transformation of the Public Sector at Microsoft, emphasised that his company supports the implementation of artificial intelligence in hospitals: The role of Microsoft is not the role of a supplier, but someone who provides support from the technical side. We want to develop patents and artificial intelligence mechanisms. So that you can use it in practice.

− We do not replace doctors, but support them in activities − emphasised Andrzej Osuch, Business Transformation Director of Lux Med Group. He also added that the initiative of the White Paper of AI in Health is the first such undertaking and a set of ready-made guidelines for the legislative process.

Bartosz Michalski, legal advisor at Medicover was of a similar opinion: The use of artificial intelligence is the real world. The lack of legal regulations is particularly acute for us. The White Paper and guidance from the business community should be used by the regulator.

Demonstrations of the Versius surgical robot, patented by CMR, enjoyed great interest at the fair. Equipment for minimally invasive procedures is already successfully used in some medical facilities. It is already used by, among others, facilities in Chorzów and Łódź. − CMR is no longer a startup, but at the beginning of the road we faced many challenges. We started with an idea. Such was the Versius robot. We got a serious injection from an investor in the amount of 600 million dollars. I don’t know a hospital director who doesn’t want to have a robotic system in their operating theatre. Here it is important to educate and make people aware of how this robot can be used effectively. − said Artur Dolny, Commercial Executive Poland, CMR Surgical. He also added that the key is to be present at every stage of implementation and in the next stage to encourage staff to use this innovation regularly in hospitals.

Piotr Paczuski, Co-Founder, CEO of UpMedic, talked about the arduous process of convincing to new products. Thanks to this startup, the doctor saves time and is able to describe 100 MRIs a day.

− Education is the most time-consuming stage of implementation, but it teaches humility. You have to convince the investor what new we are bringing and why this solution is a great support. Only later do we go to the operational stage − revealed Piotr Paczuski.

The next panel accompanying the fair organised in the startup zone on the Trends in Medicine Stage was devoted to startups and medical robotics. Piotr Nowicki, Director of the Provincial Hospital in Poznań, had no doubts that an idea is important in a startup. However, he pointed to another problem: The idea is important, but if I don’t know what to do with it, I don’t need it. Research says that as many as 98% of inventions do not go into mass production. Not because they are bad, but because their originators were unable to convince others to them.

Experts invited to the debate indicated that the processes of acquiring investments and partnership should be simplified. − If only it was easier for startups to contact investors, the future would already happen today − they argued.

This year, the SALMED fair organised by Grupa MTP on MTP Poznań Expo fairgrounds lasted three days from 23 to 25 March. The next edition is scheduled for spring 2024. SALMED is the most important comprehensive medical equipment fair in Poland gathering market leaders.  The project is sponsored by key media and industry organisations, including: the Polish Federation of Hospitals, the National Association of Private Hospitals, the Agreement of Healthcare Employers, the European Clean Healthcare Association, the POLMED Chamber, the Wielkopolska Medical Chamber, and the Polish Investment and Trade Agency, as well as two clusters: Lublin’s Medicine and Medical Cluster. 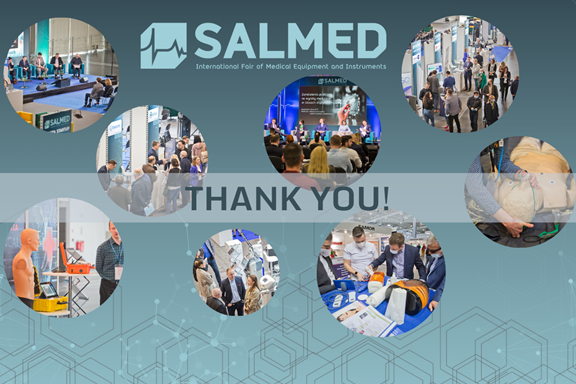 See a short film from the SALMED fair!

Second day of SALMED in the lens!

We have finished the first day of SALMED Fair 2022